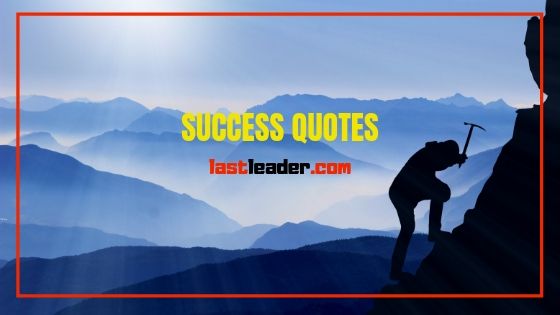 Here is the collection of some success quotes or sayings about success.

Success Status | Some sayings about success

“Take an idea. Make that idea your life. Think about it, dream it, live that thought. May your mind, your muscles, every part of your body, be full of that idea. And just leave every other idea. This is the way to success. “

“There is no secret to success, it just wants extreme hard work.”

“The person who has hope and confidence for success, the same person reaches the top.”

“Success comes in the lap of people who constantly try.”

“Some people dream of success while others wake up and work hard.”

“He succeeds, whose work makes him happy.”

“Full concentration and dedication are essential to the success of the mission.”

“Success has a unique power to eliminate faults.”

“Victory over yourself is the greatest victory.”

“Failure doesn’t mean you’re a failure, it just means that you haven’t been successful yet.”

“Work is the key to success.”

“Great resolve is the father of great result.”

“The secret to success in life is to be prepared for every opportunity to come.”

“Confidence is the key to success.”

“Failure only proves that the effort is not done with all your heart.”

“What you read, learn to implement it, this is the path to progress.”

“Don’t let your failures dominate you, but use the failures as a step to your success.”

“The world does not give you anything for free. Not a precious thing like success at all. So, one has to work hard to taste the dish of success.”

“The successful person is the one who gets up early in the morning and decides what he has to do today and by night he completes all those tasks even after many troubles.”

Friends! How did you like this Motivational Article on “Success Quotes | Success Status”? If you like these sayings about success, then you can share this article.